One of the more gossipy stories in the Spanish sport media over the past week has revolved around an interview Gerard Pique gave to La Sotana.

The big thing to come from it was the Barcelona defender saying the only time he thought about leaving the Camp Nou, since returning from Manchester United, was when he was playing under Pep Guardiola, now at Manchester City.

As far as Pique has it, his relationship with the manager changed when the defender started dating Shakira. The likely insinuation is that Guardiola wasn’t thrilled with all the off-pitch drama and that changed how he saw his player, so much so that Pique considered turning his back on Barcelona.

The Catalan newspaper quote him as saying: ‘Was it really necessary to settle scores in public and now get dirty laundry from the past? We will be attentive to Guardiola’s response (or no response).’ 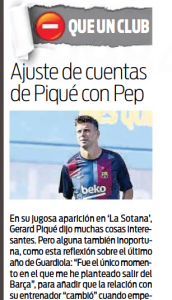 The Manchester City manager probably won’t want the distraction that replying to Pique publicly would inevitably cause, however, if he’s asked about the comments during a press conference then he may not be able to keep his opinion quiet.