Gazzetta dello Sport have dismissed the idea of any offers from the Premier League having arrived for Gabigol.

West Ham have been linked with the player for some weeks, with repeat claims the club have been in a battle with Flamengo to sign him from Inter Milan.

Chelsea were then brought into the equation, perhaps to spice things up a little and give the transfer rumour a little boost. In recent days things have gone a little quieter on the claims, and, if Gazzetta are correct, that’s because nothing has actually happened.

The Italian newspaper says that ‘in reality’ the approaches from England haven’t actually arrived and the ‘only open road’ for Gabigol is that of Flamengo.

On loan at the Brazilian club for the season just ended, the striker had a brilliant campaign and that’s why they want him back. Finances in South American football aren’t comparable to those in Europe’s top leagues, which could be why Chelsea and West Ham 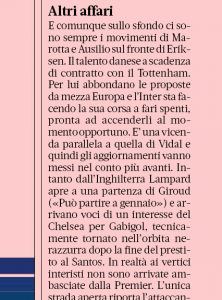 have been dragged in.

Inter, and likely Gabigol himself, will be trying to get as much money out of Flamengo as possible, English interest would help put the pressure on.