Mundo Deportivo reported today that Clement Lenglet has already given the green signal to join Barcelona.

The centre-back is set to sign a five-year deal with the Catalan club, according to the claims, after he accepted the conditions of the contract with their technical secretary Robert Fernandez and general manager Pep Segura.

According to El Desmarque.com (as relayed by the Catalan newspaper Sport), Real Madrid have now decided to join the race for Lenglet. The Spanish capital club want to ‘torpedo’ Barcelona’s efforts to sign the Sevilla star and get him themselves.

Zinedine Zidane is an admirer of Lenglet and their officials are trying to get closer to their Sevilla counterparts. The Frenchman has a release clause of €30-35m (fluctuating between reports), which makes him affordable for both the 12-time European champions and Barcelona. 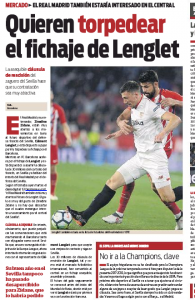 The La Liga winners have long been in contact with Sevilla and Lenglet’s representative.

It’s explained talks were put on hold as Sevilla were chasing for a place in the next season’s Europa League. Now that has been achieved, Barcelona will once again resume the negotiations for Lenglet. Real Madrid’s interest could change the dynamics.