Although there hasn’t been a lot regarding Neymar’s departure from Paris Saint Germain, the Spanish press comes out with a story to entertain us today.

Newspaper Marca says Real Madrid continue their plan to make the signing, and as they analyse all the issues around it, there’s now a special concern about the player’s fitness.

Neymar’s foot injury has been bothering him for a couple of seasons now, and according to the report, Real Madrid are looking to protect themselves in case the issue shows up again.

It doesn’t mean having new exams or anything like that. Marca make it clear that the Galacticos have all the info on the injury and the recovery. They are actually worried about money. 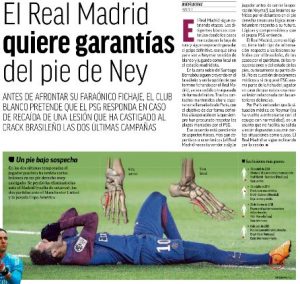 It’s said that Real Madrid want to include a clause in the contract which would force PSG to pay for part of the player’s salary in case the injury appears again.

Marca say the French side are also concerned about the injury, knowing this is one more factor why Neymar isn’t being sold so easily, and that’s why they would accept to give some guarantees about it.