Like several midfielders this summer, Dani Ceballos’ future has been well discussed, particularly after his impressive performances for Spain at the U21 European Championships.

Arsenal and Tottenham are particularly keen on the Real Madrid midfielder and have been fighting over his signature for the past month.

Both Unai Emery and Mauricio Pochettino want to add them to their midfield and according to AS, Real Madrid have now left it up to the player which club he joins.

The newspaper says they view Arsenal and Spurs at the same level and they will ‘promote his growth equally’ so, therefore, have left it up to him to decide his fate. 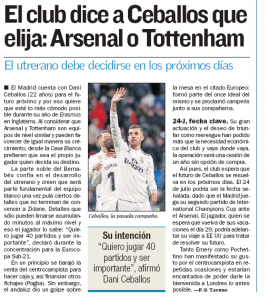 At first, Madrid wanted to sell Ceballos to fund a move for Paul Pogba but are now only interested in a loan deal and that won’t include an option to sign him permanently.

They are hoping to get the deal sorted soon, with AS saying July 24th could be the date that it is concluded. Ceballos is set to return from his holidays on the 29th but he could head to the US, where Arsenal are playing Madrid, to speed things up.