Over this past couple of days, reports from Portugal and Spain have been pointing out that Real Madrid are interested in signing Manchester City loanee Pedro Porro.

The fullback, who’s having a two-year spell at Sporting, would have drawn the Galacticos’ interest with his recent form, even though there had been no claims of strong contacts for the move yet.

Now as newspaper Record today features a new story on the situation, they claim that Real Madrid asked if they could sign him from Manchester City before the Lisbon side use their buying option over him.

According to their piece, the answer was that it would be very difficult, since Sporting already have an agreement to sign Porro on a permanent deal at the end of the season. 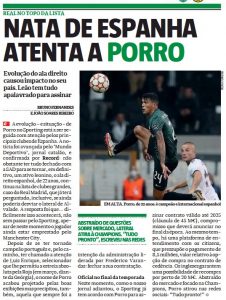 It’s once again claimed by Record that there’s a personal agreement at Sporting with the player, for him to sign a contract until 2025.

All the Lions have to do now is to trigger the buying clause and pay Manchester City €8.5m.

Then the Premier League side are expected to have a buy-back clause worth around €20m.

So it sounds like Real Madrid could only sign Porro in case the player chooses not to sign for Sporting, which sounds unlikely, or the Spanish side would need to buy him from the Lions after the clause is triggered.