One of the main criticisms that you see thrown at Paul Pogba is the difference between how he plays for France and for Manchester United.

Helping his national team lift the World Cup in 2018, the midfielder quickly became one of the leaders of that team, something he isn’t necessarily at Old Trafford.

This was fully on display on Tuesday night, as the Manchester United star took the game against Germany by the scruff of the neck, controlling the midfield and ended up being at the heart of most good plays by France.

L’Equipe, a couple of days after, look at the how influential the midfielder is within the national team squad, calling him ‘Pogboss’.

They explain: ‘Tuesday, an hour before kick in Munich, he took the floor in front of his teammates. His voice wasn’t the usual one, the one that messes with Antoine Griezmann or pokes fun at Kurt Zouma. No, it was the very loud one from before France-Argentina during the 2018 World Cup.

‘The one of the ‘Messi or no Messi, we don’t give a ****’, of the fine warrior that doesn’t doubt any longer. In fact, speaking of doubts, there were none in his words. He basically invited his teammates to show solidity and solidarity. He added that France weren’t there to win just one game, but to win the tournament’. 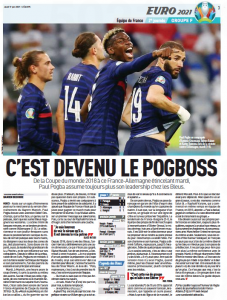 All of this stemmed from a conversation he had in 2018 with Blaise Matuidi, who explained to L’Equipe that he went to the Manchester United star to tell him he needed to become ‘the real boss’ of this team.

Pogba replied it wasn’t in his nature, but Matuidi insisted because Patrice Evra had since retired and the group needed someone to step up.

That’s when the Manchester United man promised ‘he would try’, and that’s exactly what he’s done since.

He became, as L’Equipe put it, ‘the Pogboss’.