There had been claims when the loan was being negotiated that Dortmund would have liked a buying option, but Chelsea were said to value the striker highly and therefore refused to sanction such a clause.

Five goals and an assist in Batshuayi’s first three Dortmund games have inevitably brought reports about a permanent deal, and there’s claims from England and Germany on Sunday.

The Mail on Sunday report Dortmund are ‘ready to make an offer’ for Batshuayi, and Chelsea could accept if they feel it would help them get Christian Pulisic. 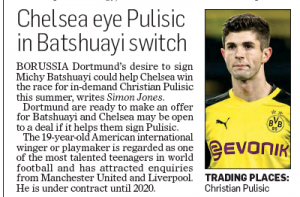 It must be said that earlier this month SportBild listed English clubs interested in the US international, and Chelsea weren’t one of them.

Over in Germany, Bild explain the lack of a purchase option and Batshuayi doing so well makes it’s difficult for Dortmund to get a permanent deal.

Whilst the Bundesliga club would be ready to invest the €60m+ they got for Pierre-Emerick Aubameyang in his successor, it’s explained Chelsea don’t need the money and could easily say no.

What Bild believe could be on Dortmund’s side is that the striker has already ‘become infected with the BVB virus’ and could push for a move.

Dortmund’s manager director Hans-Joachim Watzke is quoted as saying: “The more Michy scores, the more difficult it will be to hold him.”

Whilst Watzke is clearly quite happy to openly hint they want the move, he doesn’t want supporters to get too carried away.

Pulisic could simply be a prop in the story, with no real meaning, and what could actually make a permanent transfer likelier is BVB agreeing to some sort of buyback clause… which they’d obviously be reluctant to do.