Newspaper A Bola writes today that the Royals tried to sign the striker on a loan deal with an option to buy him at the end of the season.

But Sporting aren’t interested in letting the 20-year-old go, even though they have other options for the position, including Andraz Sporar, who has just signed for the club.

It’s said that instead of selling, the Lions are actually working to buy a percentage of Pedro Mendes which stayed with his former club Moreirense. 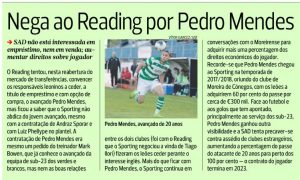 A Bola claims that Mark Bowen is the one who requested the signing, since he already knows Mendes, and Reading were expecting that the good relationship between the clubs would help the transfer, as they worked on Tiago Ilori’s move to Sporting last year.

However, it seems the Lions have big expectations around the youngster, and don’t want him to be far from the club anytime soon.