Home Championship Reading looking good in race for defender, he wants to play in...
SHARE

Reading seem to remain strong in the race for Frederico Venancio. After being linked to the Vitória Setúbal defender last month, the Royals are back on the Portuguese newspaper pages, this time leading the competition.

A Bola claims Reading are ‘pondering to advance with the signing’ of the club captain, who is also wanted by Romanian side Steaua București.

This race for the player makes his stay at Setúbal very unlikely, especially because he’s already admitted his wish to play in England. Reading and the Championship sounds like a great opportunity for him.

Vitória Setúbal have already sold a defender to the United Kingdom in this transfer window, as Fabio Cardoso left the club to join Rangers this month on a €1.5m deal. 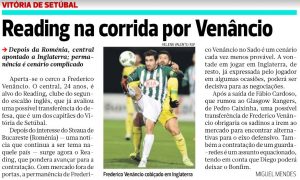 A Bola doesn’t seem to know how much Venancio would cost Jaap Stam’s men, but considering his contract is expiring next year, it shouldn’t be much more than Cardoso’s transfer.

The 24-year-old made 31 appearances for Setúbal this season, and scored four goals. Not a bad rate for a central defender.