On May 15th, we carried a report from Record, who explained Wolverhampton Wanderers are planning to spend €60m in signing Benfica’s Carlos Vinícius.

It was also explained Wolves consider it’s ‘practically guaranteed’ Raúl Jiménez is leaving Molineux in the summer as he’s wanted by Manchester United.

Reading’s Lucas João has given an interview to the same Portuguese newspaper and has backed the Brazilian to join the Wanderers.

Vinícius joined the Eagles from Napoli last summer and has impressed in his debut season for Benfica, scoring 20 goals and registering 12 assists in all competitions.

Although the 25-year-old has different characteristics to Wolves’ Mexican star, the Championship forward is of the belief the Benfica star could compliment Jiménez, if they end up playing alongside each other at the Premier League club.

“The characteristics are ideal for English football, although England has all kinds of players. In the past they were still looking for more physically strong players but, from what I have seen, England will be a place where he can succeed,” João told Record.

“Jiménez is a player with pace and a lot of will. Vinícius is more positional, but also a good finisher. They would be complementary [to each other].”

The Reading player, however does anticipate a few challenges Vinícius would face, if he decides to leave Primeira Liga for football in England. 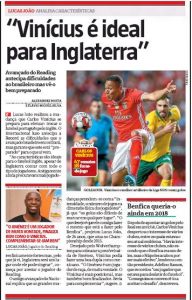 “[The big changes is related to] intensity, number of games and physical dimension of the players. What I want is for him to be able to do what he is doing for Benfica,” João stressed.

If Wolves manage to acquire Vinícius’s services, it remains to be seen he would replace Jiménez or end up playing alongside him.