Home Europe Ranieri opens up about Leicester exit, new job and similarities between the...
SHARE

Following his sacking from Leicester City, Claudio Ranieri took some time off from football management, enjoying life for a bit far from all the stress that comes with the job.

However, like the majority of people in his position, it didn’t take long for the itch to be on the sidelines to return, and he found himself a new club fairly easily at Nantes in Ligue 1.

This wasn’t the first time the former Leicester manager had managed in France, having taken Monaco to a Ligue 2 title and to a second place spot in the top tier.

Getting off to a poor start with Nantes, Ranieri has since steadied the ship after a rocky transfer window, and people are starting to believe he could repeat his Foxes feat with the new club, or, at least, that’s what they’re hoping for.

Not aiming for such glories just yet, the Italian manager does admit, however, that there are some similarities between the two squads.

He told L’Equipe: “Were the Leicester squad easy to manage? Yes, very much so. Like here, in Nantes. They’re players who want to progress. When I see one or two who are too happy about themselves, it makes me go crazy”. 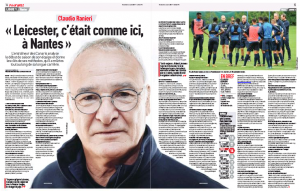 Eventually removed from his position at Leicester after a terrible start to the post title campaign, Ranieri has since moved on from his Leicester chapter, despite all the good memories he has from his time there.

Admitting he hasn’t once ‘watched the video of the celebrations and trophy lifting’, the ex-Chelsea coach wanted to reiterate he never felt like he was sacked by the players.

He said: “I was sacked because of the results. I don’t believe that story, and even if it were true, it’s not my problem, it would be the players’. If they did it, which I don’t believe they did, it’s their problem, because when I had a problem with a manager, I used to go talk to his face.

“At Leicester no one ever came to tell me anything”.

Whether or not he will repeat history remains to be seen, but with Nantes currently 4th despite losing their first game 3-0 to Marcelo Bielsa’s abysmal Lille, things are well on their way.