Long overdue, Claudio Ranieri finally shed some light on what went on behind the scenes at the King Power Stadium, and the events leading up to his dismissal a couple of months ago.

The former Monaco manager was a pundit on Monday Night Football, and revealed he believed he was pushed out from Leicester City by someone ‘behind him’, yet refused to name the culprit.

One thing he was sure of, however, was that the players in his squad weren’t to blame, even if the UK media pointed an accusatory finger at one or two members of the Foxes’ dressing room.

Speaking to Gazzetta dello Sport in an interview for their Tuesday edition, Ranieri revealed a bit more than he did on British TV. 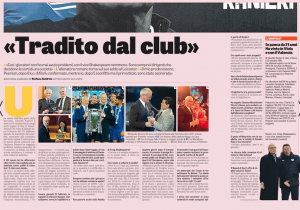 About his players being behind his sacking, he said: “I’m 100% sure (it wasn’t them). I never had problems with the players. The extraordinary fairytale allowed a lot of them to quadruple their contracts.”

With Craig Shakespeare doing so well since being appointed interim and then full-time manager after Ranieri’s dismissal, the former Leicester manager also made it clear he didn’t hold a grudge against his assistant.

He explained: “He always behaved in a loyal manner with me. He was a good assistant.”

While he hinted during the UK interview he might have a hunch who was behind his sacking, Ranieri told Gazzetta that he ‘didn’t know’, nor did he ‘care’ to find out who it was.

Maybe one day a name will leak, in a biography perhaps? Until then, however, there’s little point speculating and falsely accusing people to get a story.