After sacking Ole Gunnar Solskjær from his role at Old Trafford in November, Manchester United appointed Ralf Rangnick as their interim manager until the end of the season.

The German has been in charge of eight matches in all competitions, during which he has suffered only one defeat. However, United have managed only four wins during this period.

It’s been evident the Premier League side lack quality in the middle of the pitch and the 63-year-old wanted to fix it by bringing RB Leipzig’s Amadou Haidara to the club in the winter market, according to claims coming from Germany.

This week’s edition of SportBild explains the Mali international is Rangnick’s ‘number one’ target for January. However, the ‘transfer falters’ because the interim manager, who will start working as a consultant from next summer, is ‘not allowed to wish for anything’ at Manchester United.

Rangnick has been told the club must first get rid of ‘expensive players’ before bringing in new faces to the club. ‘That’s not all’ as the leaders of the club are ‘reluctant to convert the squad’ as per the coach’s ideas. 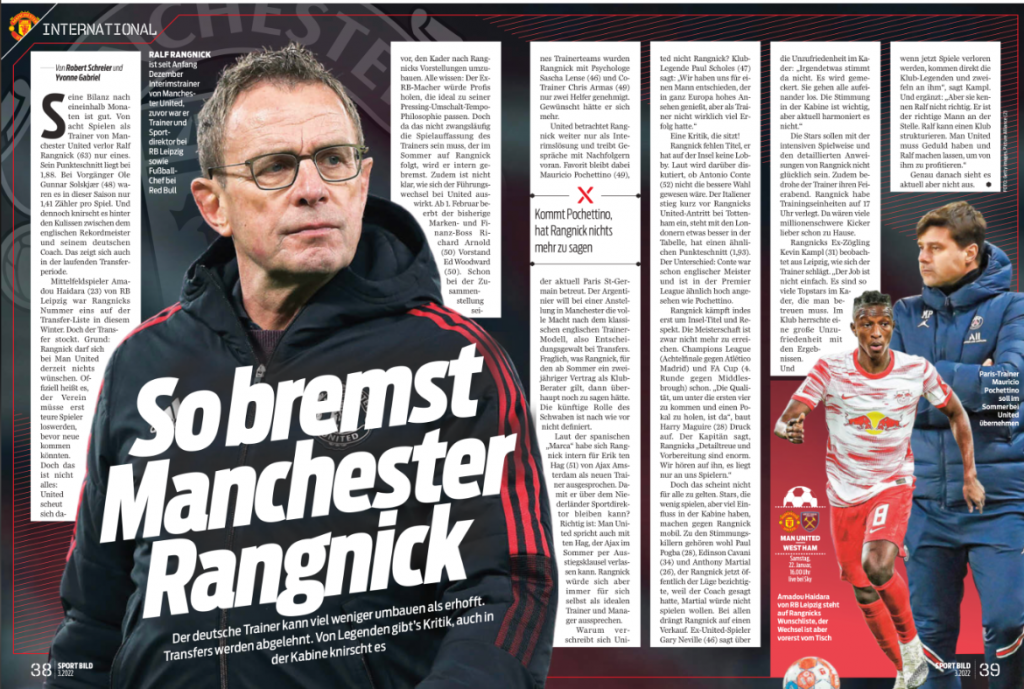 SportBild state: ‘Everyone knows the ex-RB manager would bring in professionals who would ideally suit his philosophy of pressing-switching-changing tempo. But since that doesn’t necessarily have to be the way the coach who follows Rangnick in the summer sees the game…’

The report also adds it is not clear how the change of leadership at the club [Richard Arnold replacing Ed Wooward from February 1st] ‘will affect United’.

The Manchester club views Rangnick as an ‘interim solution’ and are pushing ahead with talks for Mauricio Pochettino and Erik ten Hag. The current PSG manager is the favourite and he wants to have ‘full power’ when it comes to the decision making on transfers.

This would mean Rangnick would not have a major role and his job as a consultant is ‘still not defined’.

SportBild also point out how those players who hardly feature ‘have a lot of influence’ inside the dressing room. RB Leipzig’s Kevin Kampl, who played under Rangnick at the Bundesliga club, has urged United to trust the German’s methods.

“The job is not easy. There are so many top stars in the squad that you have to look after. There was great dissatisfaction with the results in the club. And if games are lost now, the club legends doubt him,” Kampl said.

“But you don’t really know Ralf. He’s the right man for the job. Ralf can structure a club. Man United have to be patient, and let Ralf do his thing, to benefit from him.”