Rangers are one of the clubs keeping tabs on Vitesse defender Danilho Doekhi, according to De Gelderlander.

The 23-year-old joined the Eredivisie side from Ajax in 2018 and his contract with them expires at the end of the current season.

He is now followed by Rangers, and Giovanni van Bronckhorst’s side are joined by Dinamo Zagreb and Napoli in chasing the player.

The Dutch club, however, have no plans to cut ties with the centre-back in the winter market, unless they receive a convincing offer.

Rangers wanting the Dutchman is discussed by today’s edition of De Telegraaf. In a short update, it’s claimed the Scottish champions’ manager is ‘interested’ in his compatriot.

The newspaper states Vitesse plan to hold on to their captain beyond this month, even 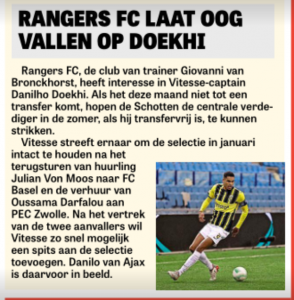 though his contract will run down in June. Rangers want to take the Rotterdam-born defender in January.

If a deal doesn’t materialise in the ongoing window, Rangers ‘hope to sign him’ in the summer, when Doekhi will be available on a free transfer.