After a positive Covid-19 test for Adel Taarabt, the alarm has been raised at Benfica, as they prepare for their trip to Glasgow today.

The club drew 3-3 with Rangers earlier in the group, with goals from Alfredo Morelos, Glen Kamara, and an own goal, benefitting Steven Gerrard’s side.

Benfica were already missing several players for the Europa League clash against Rangers, and now lost an important midfielder.

Newspaper Record writes today that Taarabt and all other players had been tested when returning from international duty on Thursday, and they were all negative. However, when the tests were repeated, the Moroccan star was the only one with the virus.

The outlet claims that following his diagnosis, all players were tested again ahead of the Rangers match, and the results will be out before their flight to Scotland this afternoon. 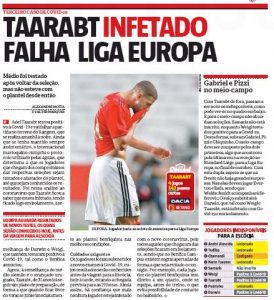 Benfica have high hopes that no one else is sick, since they’re already missing nine players for the match against Rangers now.

André Almeida, Todibo, Nuno Tavares and Pedrinho are all injured. Andreas Samaris isn’t registered in the tournament, Nicolas Otamendi is suspended, and Darwin Nunez, Julian Weigl and Adel Taarabt are all in quarantine.

All Portuguese newspapers are talking today about the hard task that manager Jorge Jesus will have to pick their lineup for the Rangers game.

Belief player ‘definitely says goodbye’ to club and will move to...