As Porto continue their pursuit for the signing of Alfredo Morelos from Rangers, the Portuguese media now has some exciting updates for the Dragons.

TVI24 show Mais Transferências claims that it shouldn’t be a problem for the club to reach an agreement with the striker, who could indeed be leaving the Ibrox this summer.

It’s said that convincing the Colombian player of a move ‘wouldn’t be an obstacle’ for a potential deal.

And in case Porto do go for the signing, then Rangers have already set the price for it. TVI24 claims the Scottish side will demand between €12m and €15m for the transfer.

Porto’s chase for Morelos has been reported for a few weeks now. 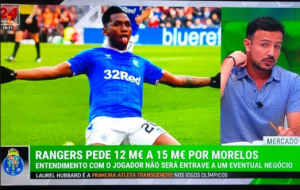 Reports from newspaper A Bola at the weekend had even claimed that the player and his entourage had already been analysing the offer from the Dragons, as his agent could soon fly to Portugal to speak to the club.

It’s been said that the striker sees Porto as a good ‘solution’ for him this summer after so many years in Scotland.