Villarreal will travel to Scotland to face Rangers in the penultimate group stage Europa League clash on Thursday.

The La Liga outfit are currently leading the group with six points, while Spartak Moscow and Rangers are in second and third spot with five points. Rapid Wien are at the bottom with four points.

With two points separating four clubs, each of them have an opportunity to qualify for the knockout stages of the second tier European club competition.

Today’s edition of AS has a story about the Yellow Submarine’s forward, Carlos Bacca, whose aim is to be the leader and help his side seal a berth in the last 32 of the Europa League.

AS expects the Colombian to be one of the players leading Villarreal’s attack and Steven Gerrard’s side’s ‘obsession’ is to stop the former AC Milan man.

A hamstring injury kept Bacca on the sidelines and it has allowed his teammates Gerard Moreno, Samuel Chukwueze and Karl Toko Ekambi to go ahead of him, which is why he is hungry to showcase his worth and the attacker ‘promises war’.

The 32-year-old’s only appearance in the competition was against Rangers and he scored one of the goals during the 2-2 draw in Spain. 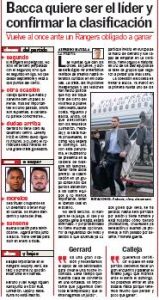 Whether he can help Villarreal progress to the next round or if Gerrard’s men will be successful in restricting him and his teammates is something that will be found out later today.