At the start of this year, Genk allowed Ianis Hagi to join Rangers on a short-term loan deal with an option to buy.

The attacking midfielder impressed for the Scottish Premiership side and his performances had drawn interest from Lazio.

Over the past month or so, it wasn’t clear where the Romania international will play next season, until Het Laatste Nieuws came up with a report on May 21st.

It was explained the 21-year-old will remain at Ibrox and only final details were left for the deal to be made official.

Steven Gerrard’s club until the end of this month to make the former Fiorentina man’s transfer permanent for a fee of €5m. 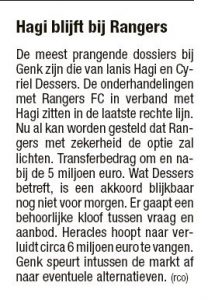 It’s claimed negotiations between the Glasgow club and the Jupiler Pro League side are in the ‘final straight’.

The newspaper also states that Rangers will ‘certainly use the option’ to extend Hagi’s stay at the club by paying €5m to the Belgian side.

This should end the saga around the player’s future.