Rangers F.C. are one of the sides eyeing a move for Bologna’s Andreas Skov Olsen, with the Italian side set to evaluate the player’s future.

That’s according to Il Resto del Carlino, who say a recent poor performance against Torino threatens to be the ‘last straw’ for the player’s time at the Serie A club, which could benefit the Ibrox club.

They explain that Skov Olsen is disappointed with his time at the club so far, having struggled to shine in Italy and a team that doesn’t use ‘offensive midfielders’.

He expected to come to the club and be an important player, but that has not been the case, so he now ‘hopes to leave’ the club, and Bologna are ready to make that happen, with Giovanni van Bronckhorst’s side seemingly waiting in the wings.

His agent has been working on potential options, and the Italian side’s leadership are ‘ready to listen’ to those offers if they are presented to them.

There are ‘rumours of requests for information’ from Real Sociedad, Rangers and Besiktas, who all believe Skov Olsen has an ‘international level profile’ and has been talked about with the national team. 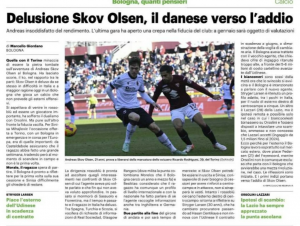 His agent is also ‘gathering information’ from England and Germany, though, so the competition could increase in the coming weeks.

It’s not the first time Rangers have been linked, but Bologna are now ready to let him go, particularly as they need to sell before they can bring in reinforcements in attack and midfield.

There’s no mention of an asking price at this point, but ‘reflections’ are being made, with everything pointing towards an exit at this point and Ibrox a potential destination.