When Rangers found their way back to the Scottish Premiership there was coverage around the world media. The Glasgow battle against Celtic, which had been missing for a long time, was set to return on a regular basis.

Then when Steven Gerrard took over at Ibrox, the battle he was set to face against his old manager Brendan Rodgers brought even more coverage, and now that there’s a title battle on between the two… it’s everywhere.

Celtic and Rangers on their own no longer make European media waves as they once may have done, but when they’re added together it becomes more than the sum of parts.

Rangers managed to beat Celtic on Saturday, thanks to a goal from Ryan Jack and good performances from players including Andy Halliday, Ross McCrorie, Scott Arfield. 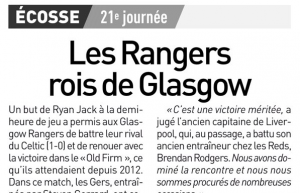 France’s L’Equipe have labelled Rangers the ‘Kings of Glasgow’, and say it’s a victory Gerrard’s side have been waiting for since 2012.

The French newspaper says Rangers ‘dominated their opponent’, and Celtic were saved from a worse defeat by goalkeeper Craig Gordon.

AS, another Spanish newspaper, give praise to Ryan Kent for setting up the goal, and say ‘The stadium celebrated it in style’.