Rangers keep on working to have one of the most interesting transfer windows in Europe. With five signings confirmed already, and two others pending medicals, Pedro Caixinha doesn’t seem to be stopping soon, as the club continue to be linked to several other players.

On Monday, Portuguese newspaper A Bola claim Caixinha is now after the left-back Miguel Layún for Rangers.

The Mexican would be a plan b because Caixinha’s priority, his former Santos Laguna player José Abella, has been too hard to sign. 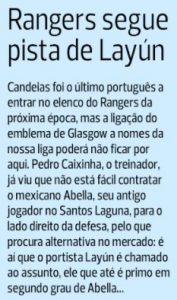 So Layún, who’s in Porto’s transfer list for the summer, turns out to be an alternative. A Bola don’t mention the figures for a possible transfer, even though it’s known Porto are looking for a good price.

The 28-year-old was signed from Watford last summer for €6m, and the word in Portugal is that this is the minimum price for Porto to let him go now.

A Bola even reveals that Layún is Abella’s second cousin, so it’s all a family thing to strengthen the left-back problem at the Ibrox.

In reality though, it would be very hard for Caixinha to put a deal together to get Layún to Rangers.