Home Premier League Chelsea Father speaks of Chelsea interest in his son – They ‘ran out...
SHARE

Liverpool’s interest in signing Jérémy Doku has been well documented and confirmed by the 18-year-old and his parents on multiple occasions.

The forward, who also had interest from other Premier League clubs like Arsenal and Chelsea in the past, left Anderlecht for Rennes in the summer.

Chelsea host the Ligue 1 side in the Champions League group stage tie on Wednesday.

Ahead of the clash between the two sides, Gazet van Antwerpen had an opportunity to interview Jérémy’s father, David Doku.

Doku Sr stressed his son doesn’t have any stress when facing big clubs.

“Jérémy doesn’t care about that. He never has stress. He just loves the game, he’s not busy with everything around it. Although he dreams of his first Champions League goal against Chelsea tonight,” he said.

According to the newspaper, the Belgium international was previously on the radar of Liverpool, Arsenal, Manchester City, PSV Eindhoven and Ajax. Even the Blues showed interest. 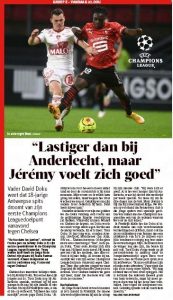 Regarding Chelsea’s interest, David explained: “Two years ago we went to England and visited Liverpool and Arsenal. We ran out of time for Chelsea, but that interest was never so concrete.”

After playing the full 90 minutes against Sevilla last week, Doku is expected to start for Rennes against Frank Lampard’s side later today.