Over the past few months, we’ve carried several reports about Barcelona’s interest in signing Matthijs de Ligt next summer, after Ajax made it clear the defender will not be allowed to leave the club in January.

Four days ago, Mundo Deportivo reported the 19-year-old is keen on making a switch to the Camp Nou and wants the La Liga winners to submit an offer to the Eredivisie outfit.

Today’s edition of the same publication mentions Ernesto Valverde’s side are one of the clubs chasing the teenager and this includes the likes of Manchester City, Juventus and Bayern Munich.

It’s claimed the player’s agent, Mino Raiola may be a hindrance for Barca in securing the centre-back’s services.

The Catalan newspaper mentions the representative views transfers as business and all he cares about is money for him and his client, while they really do not look into the club’s project or take into account the player’s future.

Mundo gives the examples of Paul Pogba and Zlatan Ibrahimovic moving to Manchester United, where Raiola earned a hefty commission and made sure his stars got big contracts.

Barca fear that Raiola will demand better wages for De Ligt and another hefty commission for himself to take the Netherlands international to Spain, something they may be unwilling to pay. 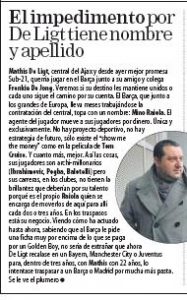 For this reason, it ‘would not be surprising’ if the super agent takes his client to Pep Guardiola’s side, Bayern or Juventus and then move him to one of Barcelona or Real Madrid three years later so that he can earn more money.

If this report is true, it’s thought Manchester City would have an upper hand in the race for De Ligt because they will be able to offer a better deal, both in terms of wages and agent’s fee, than Bayern or Juve.