Mino Raiola is once again trying to help Manchester United, and he’s trying to do that via Mauro Icardi, even though he’s not his agent.

That’s what Corriere dello Sport are reporting on Wednesday, claiming the super agent had personally got in touch with the Inter forward, even claiming he had an offer from José Mourinho’s side to show him.

Furthermore, the Red Devils aren’t the only ones interested in signing the Argentinian, and Mino Raiola would be prepared to gather all of the offers from all the clubs who want him and help him get the transfer he wants.

Ideally, the man who brought Paul Pogba, Henrikh Mkhitaryan and Zlatan Ibrahimovic to Old Trafford would have wanted to be Icardi’s agent, but when he offered his services, the Inter star politely declined, explaining he still wanted his wife, Wanda Nara, to handle his career. 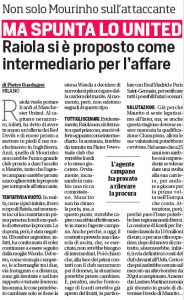 Not wanting to take no for an answer, Raiola then offered his services as an intermediary, willing to be the middle man between the Serie A club, whoever wants him and the player himself.

Icardi is said to have not closed the door on this avenue just yet, but considering his current deal includes a buyout clause, and Inter won’t accept less, Raiola isn’t exactly needed right now.

Of course, that could change if he agreed to renew and increase the transfer clause to a fee clubs wouldn’t match, allowing room for negotiations, but for now, he’s tied to Inter and wants to see where this season goes.

Currently third in the league, Luciano Spalletti’s side will need to end in a Champions League spot if they stand a chance of keeping their star, as another season without top European football could see him reevaluate his future and look elsewhere.

And if he’s got Raiola by his side by then, things could get very interesting… Manchester United start to get a few telephone calls.