As they have an update on the player’s situation on Thursday, the outlet doesn’t even mention that the Premier League champions are interested in the 19-year-old.

Their new article says that Rafael Leão is currently evaluating the offers he has, and has been unreachable for Sporting in the past few days.

According to Record, the Lisbon club can’t contact the player’s father or his agent, as they haven’t been taking any calls, despite being in the city. 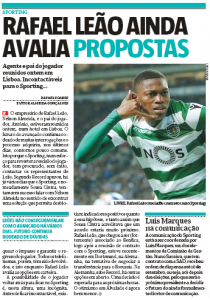 Record’s story yesterday said that Manchester City would be making a €15m bid for the youngster, expecting a ‘yes’ from Sporting.

But now they don’t even confirm if this bid was develivered, making Leão’s situation pretty dark for now.

The 19-year-old is currently a free agent after rescinding his contract with Sporting at the end of the season. But just like has been happening with other players who did so, it’s likely that his next club will have to pay Sporting compensation for signing him.

That’s why Manchester City would be making this bid.