The goalkeeper is routinely linked with a move to Newcastle, stories popping up every now and again largely thanks to Benitez and Reina having a relationship which dates back some time.

On Monday, Mundo Deportivo saw Italian reports that there’s ‘strong’ interest from Benitez in signing the Napoli goalkeeper. Then the Spanish newspaper contacted Newcastle’s manager, just like that, and asked what his Newcastle transfer intentions really are for Reina.

Benitez was good enough to confirm Newcastle United have ‘no intention’ of signing Reina at the moment, despite what’s described as a ‘strong bond’ between the player and manager. 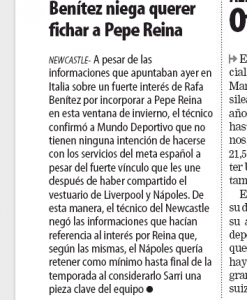 It’s also explained Napoli have no intention of letting the goalkeeper leave this month anyway, feeling he’s an important part of the club’s team this season, which is backed up by Reina starting 25 matches already this season for the Naples club.