On April 4th, we covered claims from France about Rafael Benitez and a potential job in Ligue 1.

The whole thing was quite unusual. In comparison to the vast, vast majority of rumours around Europe about anything to do with football, this report stood out because of the detail.

Newcastle United’s manager was said to be interested in a French adventure, should he leave the Premier League club this summer.

L’Equipe said he’d taken on Score Agencies, who are based in Lyon and run by agent Alexandre Bonnefond.

It was claimed that on March 6th, two employees of the agency travelled to Manchester and met Benitez in a hotel. According to the claims, the manager attended the meeting with Richard Green, described as his lawyer and advisor.

At the end of the meeting, Benitez agreed to sign up with the agency, who would represent him in France until September 1st.

The other intriguing aspect of the report is that it came just a few hours after France’s RMC had claimed Newcastle have ‘concretely positioned themselves’ for Bruno Genesio. Lyon’s manager was thought to be of serious interest, should Benitez leave in the summer.

This looked like a possible return of fire, with it being made clear that whilst Newcastle can look at other options then so too can their manager.

A day later, Benitez spoke of the claims and insisted that on March 6th he was at Newcastle’s training ground until 7pm. He also said that the only club he’s speaking to right now is Newcastle.

The latter part didn’t really matter, as there had been no claim of him speaking to anyone else anyway… that would be the job of the agency, if and when they got the nod to do so.

Newcastle fans, understandably, dismissed it all as trouble causing nonsense. But then the French media have no reason to stir things up at the club, it’s not really on their radar these days.

That there was some truth wasn’t too hard to believe. It makes perfect sense for Benitez to make sure he has other options should he not be able to reach agreement with Mike Ashley.

Today’s edition of L’Equipe looks at Lyon’s managerial situation, and reiterates that 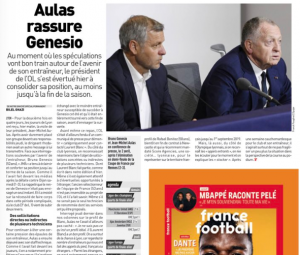 Benitez could be an option.

His contract situation is highlighted, and then it’s stated again that he’s ‘commissioned’ Sport Agencies to represent him in France until September 1st.

Should Benitez wish to rubbish the story again, then perhaps the Newcastle manager should tear to pieces that specific claim.