These claims are also reported by A Bola and they state the Gunners preferred the Benfica player took tests in Portugal before travelling to London, due to the Covid-19 restrictions in England.

After the two sides found an agreement on Monday, the left-back was training with the Eagles ‘while the last bureaucratic details were discussed’.

Meanwhile, Mikel Arteta has already got in touch with the fullback. The newspaper states: ‘A quick conversation that served for the coach to welcome the reinforcement and moralise him for the new season’.

Tavares went through severe scrutiny with the north London club, through their scouting department, recruitment team and then finally Arteta, who approved his signing. 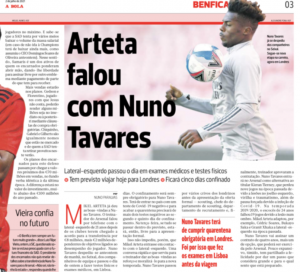 Only after that, Arsenal submitted a formal offer worth €8m plus €2m in potential bonus payments, which was accepted by Benfica.

Tavares plans to travel to London today and will have to quarantine for five days once he steps foot in England.

A Bola state that if everything goes as per the plan, the north London club will be able to present him from next Tuesday.