Liverpool midfielder Thiago has hinted he is unhappy with the new, deeper-lying midfield role he’s been asked to play at Anfield.

The Spaniard joined the Reds in a move from Bayern Munich last summer, with many believing he could prove to be one of the signings of the summer.

Things did not play out that way, though, with him struggling to establish himself in Liverpool’s midfield.

Injuries played a significant part in that, but there was also a question of tactics as Thiago often looked ill-fitted to the style and system employed by Jurgen Klopp.

The German elected to use the midfielder in more of a deep playmaking role last season, avoiding the temptation to play him further up the pitch, where he’s arguably more effective.

It’s something he has received criticism for and it seems the Liverpool man is of the same opinion if his latest comments to L’Equipe are anything to go by. 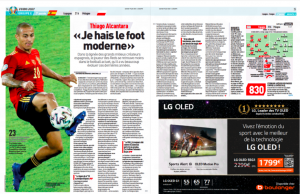 “I would say it (his ability to create) has been more limited because of a positional issue,” he told the newspaper.

“If I play number 6 instead of number 10, I’ll have less room to manoeuvre, less freedom to dribble, because I’ll have to take fewer risks.

“In the history of football, strikers have always been admired more than defenders. Because a defender can’t make a mistake, unlike the striker (who can try harder).