Alphonse Areola spent last season on loan from PSG at Fulham, and the goalkeeper enjoyed London so much that he decided he wanted to find another club there.

That was made clear by the French media on repeat occasions, and in the end the player was loaned from PSG to West Ham for the current campaign.

There was also an option for the transfer to be made into a permanent one.

Areola hasn’t been getting a lot of game time under David Moyes, which was to the surprise of nobody. Łukasz Fabiański may be 36-years-of-age, but he’s West Ham’s number one, and Areola hasn’t yet done enough to displace him.

The Polish goalkeeper’s contract expires at the end of the season, although it’s thought he’ll be sticking around. There’s every chance Areola was signed, especially with the buying option, just in case a new deal was impossible to reach. 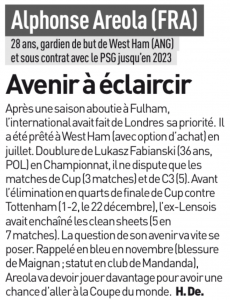 L’Equipe say ‘the question of his future will quickly arise’, and if the stopper wants a chance of being picked for France for the next World Cup, then he’ll likely need to go somewhere where he can play more games.

Areola may need to find a club where he can match game time with a city he likes living in.