Liverpool will take on Tottenham Hotspur in the Champions League final at Wanda Metropolitano later today.

Divock Origi played a major role in helping his side overcome Barcelona in the semi-final of the competition.

The Belgium international’s contract at Anfield runs out in 2020.

Last month, we carried a report from Het Laatste Nieuws, who claimed the Reds are ‘in a hurry’ to extend the striker’s contract and have already ‘made the first proposal’.

So far, no deal has been agreed between the 24-year-old and the Merseyside club to extend the former’s stay with Jurgen Klopp’s side.

Belgian newspaper Het Belang van Limburg has gathered comments from Origi’s interview and the frontman was asked about his future at the club after the Champions League final.

The former Lille man said: “That’s a good question… for the coach and the club.” 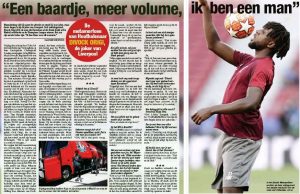 HBVL believe the question about his future was too much for him, especially when he is currently focused on Liverpool’s European final against Mauricio Pochettino’s side.