Pep Guardiola’s comments on Matheus Nunes had a big impact in the Portuguese media.

Following Manchester City’s visit to Sporting in the Champions League on Tuesday night, the Catalan manager called the midfielder ‘one of the best players in the world’, and that was enough for the local press to go crazy.

So several newspapers have stories about him today. Some lists all the Premier League clubs he’s been linked to, as Guardiola’s praise could encourage clubs to go after him, and other outlets wonder how much the player will be worth in the summer.

And it turns out that Correio da Manhã is the one with the inevitable story, hinting that Manchester City could try to sign Nunes from Sporting at the end of the season. 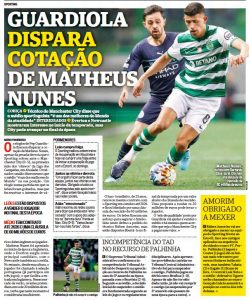 The newspaper points out that the likes of Everton and Newcastle United both had been linked to the player last year, but now City would ‘advance’ for him.

‘The ‘quality seal’ put on by Guardiola will help sell the midfielder and there are even those who believe that Manchester City will pay that amount,’ they say later in the story.

Matheus Nunes renewed his contract with Sporting last summer and is now protected by a €60m release clause. The Lions, though, are unlikely to demand that much, and according to Correio da Manhã, half of that amount should be enough to take the player.