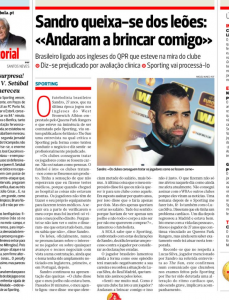 After failing a medical at Sporting, Sandro gave an exclusive interview to The Sun over the weekend. The player suggested that the Portuguese club didn’t examine him right, and took advantage of it to offer him half of the salary agreed.

But his quotes didn’t go down well in Portugal. Record had a two page interview with Sporting’s clinical director Frederico Varandas, who disavowed the player’s statements.

When asked about what really happened, the doctor said: “Even having read many things that were not true, I will defend the player. First point, I fully understand his frustration. I never met any player who had a medical examination and thought he was not able to play. Second important point, I did not consider Sandro as unfit.

“I have requirement criteria set by me in the clinical department. I believe that the player can be fit, unfit or with reservations. Sandro was not a case of disability, he can play football. Does he meet the requirements that I determine for Sporting Clube de Portugal> No. My decision.”

The doctor denies the case has anything to do with dropping the player’s salary: “He knows this is not true. We had doubts. We ordered a change that was made. Then we talked to him. He knows why he doesn’t fit the prerequisites of Sporting.”

“No one played with Sandro”, said Varandas. “He knows the exams he did. The final decision was not disability. I simply told the president: ‘I have reservations and would not recommend’. There is a management of my information. And the president can say that, even with reservations, he can even accept the player, but with a low risk.

“Maybe that’s what he’s talking about. But I have no idea. Sporting now have a highly professional medical department, recognised by big clubs and UEFA. It’s not my area but I know the legal department of Sporting will not stand idly by after these statements. I’m glad that Sandro has the idea that other clubs follow what I say. I never dismissed a player for information from other doctors.”

Another Portuguese newspaper A Bola are claiming Sporting are looking to sue Sandro after this. The club are said to “consider the statements wrong” and could be taking legal action against the midfielder.

Sporting are not shy of controversy, or legal threats, and perhaps their fury shouldn’t be taken quite as seriously as it may be if from another club.