Signed from Metz back in 2016, Yeni N’Gbakoto’s time at QPR has been a mixed bag to say the least.

The 25-year-old only started sporadically last season under Ian Holloway, coming off the bench more often than not, but this season has seen his time on the pitch decrease drastically.

With just 142 Championship minutes to his name, the DR Congo international could very well start looking elsewhere for regular football, and, thankfully for him, there’s a club interested.

According to L’Equipe on Wednesday, Guingamp in Ligue 1 are looking for reinforcements on the wings, and have ticked N’Gbakoto’s name as a potential option. 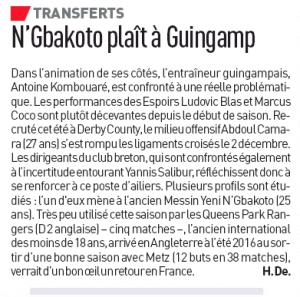 With Abdoul Camara injuring himself pretty badly and uncertainty about Yannis Salibur’s future at the club, the QPR forward’s profile fits just what they’re looking for.

Furthermore, the newspaper suggest N’Gbakoto wouldn’t be against a return to France himself, clearly disappointed with his current situation at Loftus Road.

Certainly one we’ll be keeping an eye on over the coming weeks.