Home Championship QPR in double scouting mission this weekend, looking for something in specific...
SHARE

It looks like Queens Park Rangers officials were really focused on finding talents from the Portuguese league this weekend.

Although the Loftus Road side are not often seen on Portuguese scouting lists, they’ve been mentioned twice for the last round in Liga NOS. First, club emissaries watched Porto’s game against Marítimo. And now, there were representatives at Moreirense’s match against Benfica.

Newspapers A Bola and O Jogo both report QPR’s presence at the match, although neither of them knows who the London side were watching.

Just like expected, it was an easy win for Benfica, who managed to get a great 4-0 victory away from home and continue to seek the league title. 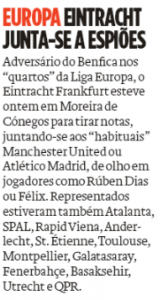 The result makes it obvious that there wasn’t much to see from Moreirense for QPR. From the away side, there were great displays from left-back Alex Grimaldo, midfielder Andreas Samaris and winger Rafa Silva, who was man of the match.