In early May, French newspaper Le Parisien reported PSG’s owners, QSI, could be looking to invest in a Championship club.

At that stage, Leeds United looked to have a good shout of automatic promotion to the Premier League, so wouldn’t have fit the requirements for a second tier club who could be built up towards the Premier League.

Since then Marcelo Bielsa’s side have wobbled and now find themselves in the play-offs.

Le Parisien said: ‘For Qatar, setting out to conquer England would be a new way to strengthen its presence in European football. This is of course materialised by the PSG but also by Eupen, in Belgium, led by Claude Makelele and property of the Aspire Academy.’

Leeds have a relationship with Aspire, making them an obvious possibility should they remain in the Championship.

Aston Villa also have a place in the play-offs, with one game of the season to go.

Nottingham Forest, again under Martin O’Neill, are 11th, and Queens Park Rangers find themselves in 19th without a manager. 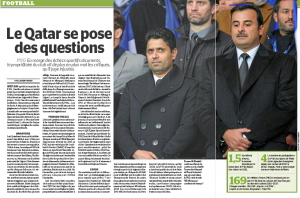 If QSI would be looking for a grand old name of English football, fallen on harder times, then Leeds, Aston Villa and Nottingham Forest are obviously prime candidates, especially if they remain in the Championship.