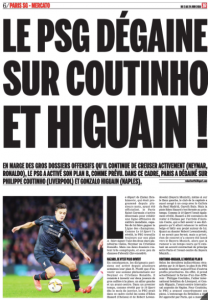 It’s that time of the month again where Le10 Sport have their magazine, and it’s filled with goodies, some more believable than others.

A vast chunk of their edition normally revolves around Paris Saint-Germain and who the Qataris could splash their money on this summer, and June’s edition is no different.

The Ligue 1 champions are apparently looking to replace Zlatan Ibrahimovic, with Edinson Cavani still failing to fully convince, and their big target in that position is Gonzalo Higuain.

That’s not what this story is about, though, as the French club are also desperately trying to find a new winger, and, with Eden Hazard apparently out of reach with Antonio Conte arriving, their attention has turned to Liverpool’s Coutinho.

According to Le10 Sport, Paris Saint-Germain have already made their intentions clear to the player’s entourage, and the response has been positive.

Moving to the French club would allow him to play Champions League football, something he would miss out on by staying at Liverpool next season, and it’s stated he’d relish the challenge of doing so.

Those in charge at Paris Saint-Germain have apparently also let Liverpool know they would be prepared to spend around €60m on the Brazilian forward, but there is one problem with a potential transfer, and that is the limit of non-EU players allowed in the Ligue 1 side, with the three spots already taken up.

For Coutinho, who doesn’t have another passport, to arrive, one of either Maxwell or Lucas would need to leave, and considering the affinity Paris Saint-Germain have with the left-back, Mr Moura is the most likely to go.

Until they find him a club (Liverpool have conveniently been linked with him in the past), Coutinho will need to stay put.

A lot needs to happen for this move to materialise, and until the first step is taken (selling Lucas or Maxwell leaving the club on a free), we won’t be holding our breath.

Club ‘hope to complete’ transfer of Leeds United player – Has...

Club has ‘firm offer’ from Everton for Player – Toffees ‘willing...