Home Europe “He proved to be a great penalty taker” – Mourinho has tongue...
SHARE

Sacked from Manchester United back in December 2018, José Mourinho landed quite comfortably on his feet at Tottenham a number of months later.

Since then, however, things haven’t gone all that well for the Portuguese, who, while redressing the bad situation left after Mauricio Pochettino’s exit, wasn’t able to get Spurs back into a Champions League spot, finishing the season in sixth.

On the other hand, his successor at Old Trafford, Ole Gunnar Solskjaer, was able to return Manchester United to the elite European competition this season, finishing third after a dramatic 2-0 win against Leicester on the final day.

This was helped by a great run of form post Covid-19 break, spearheaded by their January transfer signing, Bruno Fernandes, who managed to score eight goals and assist another seven in 14 Premier League appearances following his arrival. 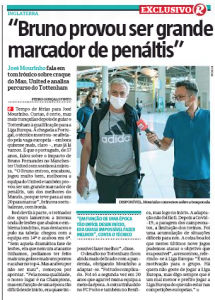 With the season now over, Mourinho returned to Portugal for a short holiday, and upon his arrival gave some quick answers to questions from Record, including what he thought of his compatriot’s first few months in England.

He replied, tongue in cheek: “Bruno came in, was fit, played very well, improved the United team and also proved to be a great penalty taker, one of the best in the world, because he had about 20 to score”.