With the Henrikh Mkhitaryan business now out of the way, we thought we were done with the AS Roma and Arsenal drama, but we’re not.

At least, that’s what Corriere dello Sport on Monday are saying, as they look at how the Serie A club can make money this summer.

They have three players capable of bringing them up to €90m, and those are Cengiz Ünder, Justin Kluivert and Patrik Schick.

We’ll focus on the middle one of those three here, as the young winger was part of the early talks between Arsenal and Roma for Mkhitaryan, but that swap move never took place.

Instead, the Gunners player was allowed to cut his contract short in exchange for a fee, thus allowing him to freely sign for the Italians once the season ends.

But what about Justin Kluivert in all this? 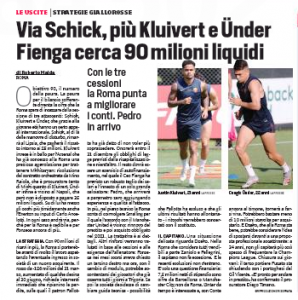 Well, the Italian newspaper states the player is ‘in the running’ for Arsenal, and there’s the suggestion he could be valued around €30m.

That’s because Roma are looking for €90m between the three, and with Ünder’s price set at €35m and Schick likely remaining in Leipzig against €25m, that leaves €30m or so for Kluivert.

It’s not much in terms of details, but it certainly shows that Arsenal still aren’t done with the Dutchman, and Mino Raiola is still trying to pull some strings behind the scenes.