Back in the summer transfer window, Tottenham Hotspur emerged as the main contenders for Sporting midfielder João Palhinha.

Spurs spent a couple of months being linked to the 26-year-old, and despite the ‘promise’ they would make an offer for the move, that was apparently never put on the table.

Now Palhinha continues to do well for club and country, having rested at the weekend so he can start in his best shape in the Champions League on Tuesday.

And when speaking about him in a long piece today, newspaper Record writes that the market ‘continues to be attentive to the evolution’ he’s been having.

It’s said his performances for Portugal and Sporting ‘continue to whet the appetite of clubs in the main European leagues, such as England’. 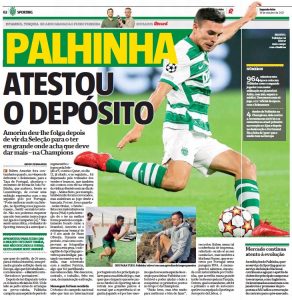 Record claims the number of interested sides is increasing and there’s the ‘promise’ of proposals for the January window.

The big issue in the summer, however, seemed to be Palhinha’s price. It was claimed at one point that Tottenham would like to start conversations from €20m, while Sporting would demand twice as much.

Now with the player continuing to do well, it becomes clear that the Lions will keep asking for a big price, especially if other English clubs join the race for him. So Nuno Espírito Santo and Daniel Levy would have to be convinced he’s worth a lot more than they thought in the summer.