Tottenham Hotspur and West Ham United ‘have been interested’ in Sevilla star Youssef En-Nesyri, according to Thursday’s edition of Mundo Deportivo.

The Hammers have long been searching for a new striker after allowing Sébastien Haller join Ajax in the winter market.

David Moyes’ side looked at a handful of strikers in January, including En-Nesyri, but their efforts to sign a new No.9 is yet to be successful, and while West Ham still retain an interest in the 24-year-old, they are now joined by Spurs.

The La Liga side need to make a big sale in order to make new signings in the summer. 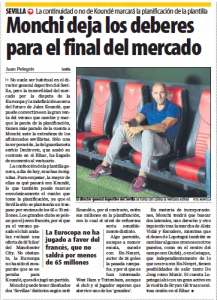 Jules Koundé is on the list of Tottenham, Manchester United and Real Madrid but if Sevilla
fail to cash in from his sale, they may have to look at the option of cutting ties with the Morocco international, who finished last campaign with 24 goals.

Despite the interest shown by both Tottenham and West Ham, both Julen Lopetegui’s side and the prolific striker are hoping ‘one of the greats’ would arrive in acquiring his services.

In other words, En-Nesyri and Sevilla would be in favour of joining a club bigger than the two English clubs were he to decide to leave the Spanish side