On June 29th, Bild reported Arsenal have VfL Wolfsburg’s Wout Weghorst ‘in mind’ to replace Pierre-Emerick Aubameyang, if the Gunners star decides to leave the club this summer.

The Dutchman has three more years left on his contract at the Bundesliga club.

This week’s edition of SportBild have a lengthy interview of Weghorst.

The Netherlands international has changed clubs every two years since 2012 and he  joined the German side in 2018. When asked if he Wolfsburg have to worry, he said: “Nobody has to be afraid. It is good for a club to get a lot of money again after investing in a player.”

“I have ambitions and want to achieve the highest. In the past two years I have been able to show that I can run on the level and that there is more for me.”

SportBild asked a follow up question, asking him to explain his comments and then specifically quizzed about the reports linking him to Mikel Arteta’s side.

“We discussed that we should sit down if something exciting should come for me. But because of Corona, we have a strange market,” Weghorst explained.

“I get a lot of recognition in Wolfsburg, I play an important role in sport and in human terms. I feel good, my family too.” 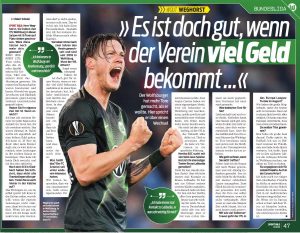 “For me, it is also important whether VfL will do everything in its power to win titles in the future. But I trust the sporting leadership.”

Weghorst has been in prolific form for Wolfsburg in the last two seasons as he managed 17 goals and seven assists in his first season, followed by 16 goals and three assists in the recently concluded campaign.