Home Europe ‘The price is not low’ – Liverpool told transfer will cost them...
SHARE

Since Liverpool were able to buy FC Porto’s biggest star in the middle of the season, the Portuguese media has no doubts about the Reds’ strength in the current transfer market, believing that they could make similar moves when the summer comes.

Following recent claims from the English media claiming Nunez is one of the players who Jurgen Klopp would like to sign in the next transfer window, the outlet comes up to say he’d be even more expensive than Diaz was.

O Jogo claims the Uruguayan’s price ‘is not low’, warning that it’d take €65m to take him out of Lisbon. 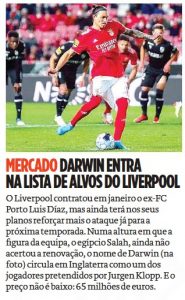 Darwin Nunez is protected by a release clause worth €150m, which means Benfica have a huge margin of negotiation when sitting to discuss his sale in the summer.

The youngster became the Eagles’ sensation this season, with 25 goals scored in 30 matches, including those against Barcelona and Bayern Munich in the Champions League.

Nunez is currently the Portuguese league’s top scorer, with 20 goals, and still followed by Diaz, who left Porto with 14.