With Marco Silva under pressure at Everton, talk about who the Blues could hire to replace him is rife.

While a club just outside the relegation zone may not be appealing to the biggest of managers, the Blues will no doubt set their sights high.

It’s been well established that owner Farhad Moshiri wants to make a big-name appointment to catch the fans attention and one he tried to get in the past may soon be available.

Atlético Madrid manager Diego Simeone was a manager Everton sounded out in 2017, to much ridicule, but they may want to test the water once again.

Things have not being going well for Atlético this season, with the club currently sixth in the table and six points from the top despite a massive spend in the summer.

Marca cover the situation today with their headline stating there is a ‘divorce on the horizon’ for Simeone and Atlético.

They explain that their performances this season are not going down well at the club, who had planned for a ‘successful season’ and had ‘clear objectives’, the league, Champions League and cup.

Instead of that success, there has been a ‘harsh reality’ that the team isn’t working and Simeone is getting most of the criticism. According to the newspaper, is it ‘clear’ that Cholo ‘has not hit the key’. 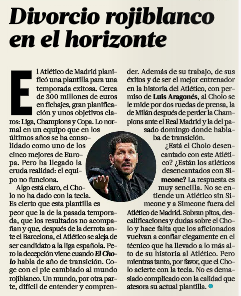 The Argentine manager has talked about how this is a transition year for his team, and that has caused ‘disappointment’.

While Atlético are not disenchanted with Simeone yet, there are ‘whistle-blowers, criticisers and doubters’ about Simeone and it appears he needs to win those people over.

If he can’t, a divorce may be in order, and that would undoubtedly be of interest to Everton. While they’d need to do a lot of convincing to secure Simeone’s signature, there’s no doubt they’d try after their ambitious attempt two years ago.

Indeed, reports suggested that Simeone was curious about the offer and perhaps, should a new one be good enough, he’d be tempted to move.

In the meantime Everton will certainly be keeping their eye on the situation, with it not looking like Marco Silva will make it beyond Christmas at present.