Four days ago, Tuttosport reported that Inter Milan, and Ivan Perišić’s suitors, must ‘watch out’ for Tottenham Hotspur in the race to sign the player this summer.

The 33-year-old has just over a month left on his contract at the San Siro and the Serie A haven’t reached an agreement for a new deal.

As the uncertainty around the wing-back’s future continues, Tottenham are making efforts to secure his services.

Tuttosport state Simone Inzaghi’s side have proposed a two-year deal that will include an annual salary of €5.5m. Inter are now ‘waiting for a definitive answer’ from the Croatia international, ‘by tomorrow’.

Inter had a meeting with Perišić’s entourage on Monday and it seemed that both parties would be able to find an agreement to continue their association together.

This was before the ‘pressing of Tottenham’ and it ‘could have breached’ the Italian club’s efforts to secure the player’s future. Antonio Conte’s side have ‘forcefully joined’ Juventus and Chelsea in the chase for the player’s signature. 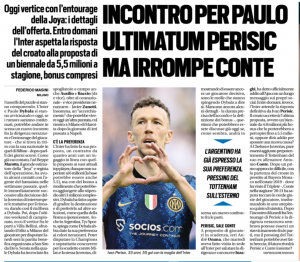 The Italian coach had Perišić at his disposal during his final season at Inter. Operating mainly as a left wing-back, Perišić’s finished the 2020/21 campaign with five goals and five assists from 42 matches.

It remains to be seen whether Conte and the Croatian will be reunited at the north London club.