Brahim Diaz’s move from Manchester City to Real Madrid will be sealed ‘in the coming hours’ report Marca in the Saturday edition of their newspaper.

The 19 year old’s contract was set to expire at the end of the current season and without a renewal or the realistic prospect of one, City have decided to take the money on offer rather than seeing Diaz go for free at the end of his deal.

An early move is also what Real Madrid and the player himself wanted.

Diaz was worried about being somewhat ostracised at City if he signed a pre-contract agreement with another club, and Madrid were concerned they could lose out to someone else. 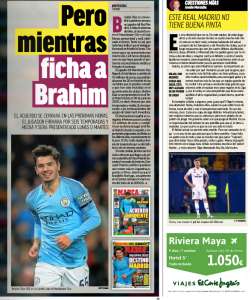 Marca report the player will sign a six and a half year contract with the Champions League winners and will be presented by the club on Monday or Tuesday, once the actual contract is signed and a medical passed.

The player will earn €3.5m per season and Manchester City are receiving a €15m fee which can rise to €20m with bonuses.