Even though Marko Grujic seems to be on his way out of Anfield this summer, it doesn’t look like Liverpool will be able to make a big sale with him.

Following the midfielder’s loan spell at Porto, it’s not a secret that the Dragons would now like to sign him on a permanent move, but are struggling with the asking price.

A report from newspaper Record today takes the latest claims from England which say that Liverpool have given their ‘ok’ regarding Grujic’s exit and the player now believes everything will be solved before the end of the month.

The Portuguese outlet, however, makes one thing clear. They say it’s ‘practically impossible’ that Porto would be able to match the Reds’ demand, which is said to be €17m. 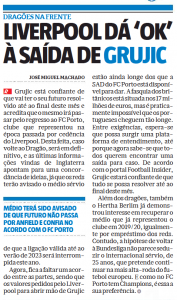 Record also points out that there’s competition from Hertha Berlin from the signing. Porto should have the advantage of offering him the chance of playing the Champions League, but they must find a way of reaching a financial agreement with Liverpool first.

So whatever Liverpool’s decision would be, the Reds should now be aware that they’re unlikely to make a lot of money when selling Grujic this summer. The Premier League side spent €7m when signing him from Red Star back in 2016.