On Wednesday, we covered an interview in Sport/Foot in Belgium in which the magazine interviewed their country’s “Secret Footballer”, who was commenting on the ongoing money laundering/match fixing scandal that has taken the Jupiler Pro League by storm.

Within the conversation, he discussed Mogi Bayat, one of the main agents accused of wrongdoing, who is currently being detained, and the fact players like Dodi Lukebakio and Obbi Oulare moved to Watford for hefty sums, despite them never really achieving anything spectacular prior to their transfers.

Explaining that clubs were fully aware of the representative’s methods, he also broke down the manner in which he duped players into believing they were getting a great deal when he was in fact pocketing some of the money they should have been earning as commission.

On Thursday, it was revealed that Oulare, currently on loan at Standard Liege from Watford, had pressed charges against his former agent, Stijn Haeldermans, for ‘fraud’ and ‘violations of intermediary labour legislation’ regarding his transfer to the Hornets from Club Brugge, while Haeldermans is pressing charges against the player in order to get his final compensation from the transfer.

Also involved in the deal was Daniel Kimoni, one of Haeldermans’ former associates, who opened up to Le Soir about how the deal went down, and how so much ended up out of their hands because of Mogi Bayat. 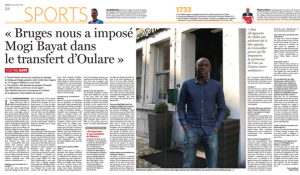 It all started after Club Brugge signed Jelle Vossen and Leandro Pereira, and Oulare was told he would be the third option at Club Brugge.

This is when Bayat and Haeldermans rang Kimoni to explain to him that Watford were offering a solution, since the Premier League window was shutting 24 hours later than Belgium’s.

At this point, Kimoni explains he was against the forward going to Vicarage Road as he felt he wasn’t ready, but Bayat turned on his charm and sold the transfer to everyone involved.

The fact the super agent knew every detail of Oulare’s contract led Kimoni to believe that he’d ‘already sorted everything out with the Brugge board, who imposed his presence on us in the transaction’.

Kimoni explained: “Privileged contacts? It was far more than that. We all went to London because we had an appointment at the club’s training ground. At that point, we had less than 24 hours left in the transfer window. For a long time, I’ve had the impression that Mogi was the director of football at Watford because he was so at home in that office.

“Pozzo just came and went throughout the day, leaving Bayat to do what he wanted. That day, Mogi had four dossiers in front of him to sort out for Watford, of which only three took place.”

Kimoni then revealed it was clear that Mogi and Brugge were both ‘forcing our hand, as well as Obbi’s, who ended up getting screwed over’.

He continued: “It’s the right term. Obbi admitted to me a few months later that the manager at Watford didn’t know him at all, knew nothing about him and had never seen him play. He recognised he had been duped, on the sport side, because he never played. It wasn’t a good transfer.”

At this point, the former associate revealed he had an argument with Bayat, who had backed everyone, especially Oulare, into a corner, as the player ‘didn’t want to be the third option at Brugge before being convinced by the financially very interesting contract put in front of him’.

Once that was sorted, Brugge still needed to sign off on the deal for €8m, and Kimoni explains neither him nor Haeldermans were able to get hold of the club’s CEO, Vincent Mannaert.

Bayat? “He got hold of him with his first attempt, and he told him: ‘Make sure you get rid of the 20% owed to the family and the agents, or the transfer won’t get done’. Blackmail! And I’ll say it myself, criminal conspiracy! Obbi’s parents were then forced to give up on what they were owed, which was €800k, while Haeldermans and myself were meant to get €400k each.”

And that’s what happened.

However, Kimoni reveals he did eventually get some money from the deal, but only because Watford did so as a kind gesture.

He said: “I’ve nothing to hide. I received two payments. The first a month after the signature, and the second the following January, which were 3% of Obbi’s salary over five years (around €250k). This is what Haeldermans and Bayat should have got too, normally.”

That’s less than the 5% he was originally owed, and he has no idea where those 20% (the 10% owed to the parents and the two 5% the agents were officially meant to get) went.

As for who’s right between Haeldermans and Oulare, who, let us remind you if you’re still with us, are currently pressing charges against each other…

“Obbi, of course,” said Kimoni, “Haeldermans got his money. As did I. Let’s be honest. Why would he be allowed a second commission? When we signed the deal, we accepted the situation. That’s it. He’s pushing it when we know that Oulare got screwed over by Haeldermans, who, in my absence, made him sign sponsor contracts, taking home with him 25% of the fees, which Obbi should never have had to pay.”