Much like they did when they bought Adalberto Peñaranda from Deportivo La Guaira to Udinese, the Pozzo family are considering bringing in Carlos Benavidez to Watford.

Well, according to Gazzetta dello Sport, the Uruguayan defensive midfielder could also end up at Udinese, and the Italian family are still deciding which club they should use.

The 19-year-old, who slowly but surely made his way into Defensor’s first-team last season, already has 29 Uruguay U20 caps to his name, and would solely be one for the future.

Like Peñaranda, Benavidez would likely be brought in to either Vicarage Road or State Friuli, only to be loaned back out straight away to a club where he’ll be used and develop further. 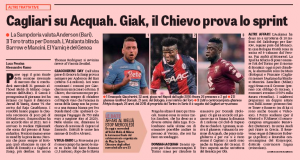 Known to do this quite often with young South American talent, the Watford owners have built themselves a nice little niche, finding success stories in their attempts with the likes of Luis Muriel or even a certain Alexis Sanchez, allowing Udinese to make great profit down the line.

It remains to be seen whether Benavidez finds as much success if the Pozzo family agree to gamble on him, but, as Gazzetta say, they’re studying the possibility of using Watford as a landing spot for him.

Perhaps one to get excited about?